2018 is the 100th anniversary of the end of the Great War and the end of my grandfather’s service with the Royal Munster Fusiliers. 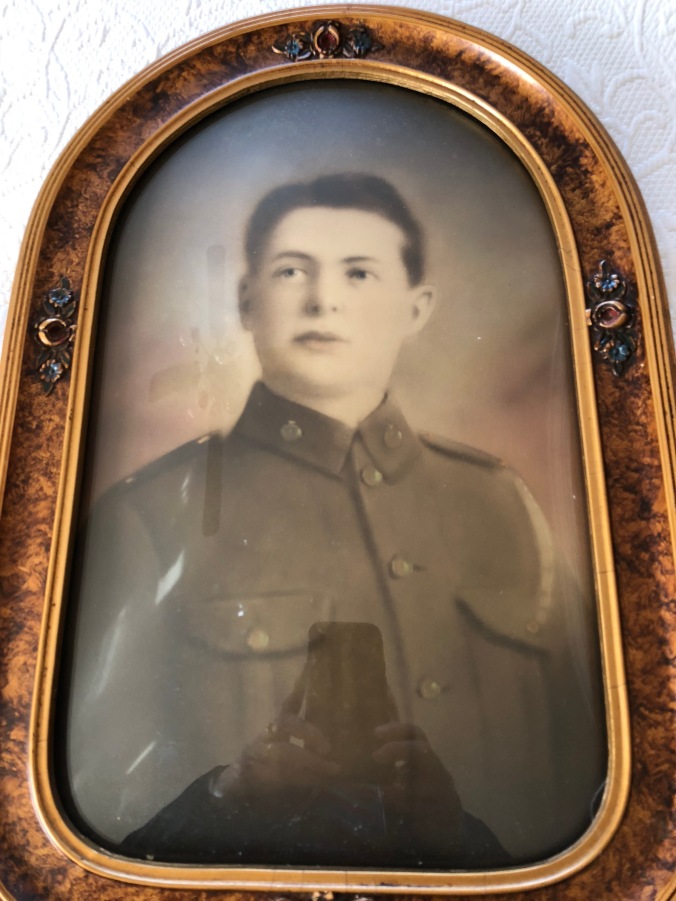 John Joseph Flynn (1895-1975) was honorably discharged in October of that year and returned to Rathcormac where he worked at Kilshannig House and operated a small livery company in the village.

It was at Kilshannig that Jackie Flynn met Mary (Molly) Cahill from Ballybrowney. Jack was the driver for the family and Molly was the cook. I don’t have much information for the two of them between 1918 and when they eloped and were married on October 23, 1920, except for a memory of my father telling me that Patrick Cahill, Molly’s dad, was none to happy saying “that feckin Jackie Flynn” — and wouldn’t step a foot into their house until 9 months after their marriage — my dad was born more than 10 months after the wedding.

While I’m curious about their entire lives in Rathcormac/Ballybrowney — Jack, who was born in Cork City, first shows up in Rathcormac in the 1901 census as a 6-year old, living with his grandparents on Bride Street in Bridgeland East — a curious fact as his parents (Denis and Bridget) and his four siblings were living on Thomas Street in Queenstown (Cobh) . Molly on the other hand was born and raised and lived at Ballybrowney from 1898 until she married Jack in 1920.

Looking back and trying to make sense of family history, without the first-hand recollection of those who are under study can be difficult and frustrating. Why didn’t I ask more questions when they were alive — why 40 years after Jack’s death am I now more interested in understanding their journey then when he was alive. The simple truth is that I was just 16 when he died in 1975 and only remember sitting down and interviewing him about the Great War for a history school history class — I think it was about the Battle of the Somme.

But the years have passed and the technology to gain access to the records and uncover some of the past has only now been made more accessible to those of us who live an ocean away from their village.

I’m heading back to Ireland this year, as part of my university research leave, to research, study and teach with the public relations faculty at Dublin City University. I’ll be there in early May to set up our research agenda and then return in September for a longer period (6-7 weeks). It will be during that time that I will have a chance to spend my spare time digging through the archives in both Dublin and Cork (and maybe even London) to understand Jack’s war service and Irish military service after 1918.

The Irish Military Archives does have a file on Private John Flynn, who was a member of the Irish Army as confirmed by the Irish Army Census in November 1922 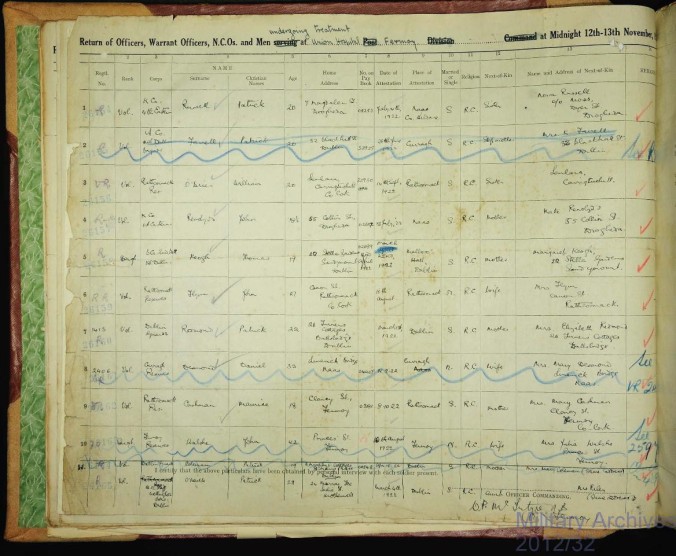 (listed as a member of the Rathcormac Reserves while undergoing medical treatment in the Union Hospital in Fermoy). But little is known of his service in Michael Collin’s national army. Molly’s brothers William and Michael were also members of the Irish army and served during that period as well.

There has been much speculation within our family on the role they played during the Irish Civil war, before and after Collin’s assassination in August 1922. This speculation has been fueled by some who believe that Jack and Molly were “asked” to leave Ireland in 1925 — just one month after Molly’s brother Michael Cahill left for Boston in August 1925. No doubt they left with their two young children in tow “to better their lives” as my great aunt Sheila Monohan recounted to me during visits in 1998 and 1999. While this may in fact be true, and they did better their own lives and the lives of their Irish-born and Canadian-born children, it doesn’t shed light on the notion that they were forced to leave by Eamon De Valera’s supporters.

So back to land of my father’s birth (and the homeland of my mom’s grandparents — the Browns, Riordans, and Farrells) this year. In hopes of opening up a few more windows into our past and the journey to find the “O”.