Part of the intrigue of researching your family tree is finding interesting tidbits from your relatives’ pasts. Maybe it’s true about what sometimes is recounted when you ask questions about your past — “sometimes you just don’t want to know: Maybe they were criminals!”

My great grandfather Denis O’Flynn (1875-1947) had an interesting life. He was born in Rathcormac, County Cork, Ireland to John Flynn and Hanorah (also known as Norah) Hogan on August 15, 1875. He was the fifth of six children and the youngest of two boys. At the time of his birth, his mother Norah was 30 and his father John was 38. The Flynn family lived on Bride Street in Bridgeland East (which is the area behind the Rathcormac Inn and the Bride Villa — which I believe was owned by Edward Barry, a local doctor).

Denis married Bridget O’Leary on August 25, 1894 in St. Joseph’s Church in Cork City when he was 19 years and Bridget was 20. Bridget was born in Cork to Bridget Kelly and John O’Leary and they lived at 4 Fair Lane in Cork City. On their marriage certificate it states that the couple lived in the Ashburton area of Cork City, which Google tells me is around Dillons Cross and the Old Youghal Road.

Eleven months after their marriage, my grandfather, John Joseph Flynn was born on July 20, 1895 while the couple was living at 92 Roches Buildings in Cork City — a tiny row house built after the famine. I’ve linked to an interesting article about the development of these buildings. In the article it describes the houses: “The buildings, known as Roche’s Buildings had one small living room, a kitchen and two garret style upper bedrooms and were built by army personnel for their own use. The dwellings were on-street and had a small rear yard which contained a toilet outhouse. There are about 150 of these type houses in the community.” 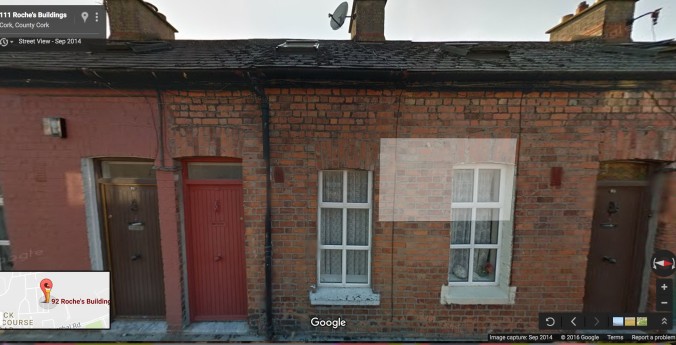 Denis and Bridget had 10 children between 1895 and 1908: John, Denis, Norah, Christina, Daniel, Cornelius, James, Eileen, Kathleen and Bridget. They lived in a number of different locations in Cork during those years. One interesting item that I discovered early in my research was that my grandfather was living with his grandparents, John and Norah Flynn in Bridgeland East/Rathcormac in 1901 — as listed on the census of that year. Perhaps because Denis and Bridget had four other children at home at the time, they decided to ship the six-year old John to live in Rathcormac so that he could attend the national school which was located within a stone’s throw of their house on Bride St.

One of the stories that I had heard while I was growing up was that Bridget died in childbirth, during the birth of her 10th child. We had no information about my grandfather’s siblings, except from his brother James whom we met during our first visit to Ireland in 1973. The story that we were told was close to being real — Bridget, the youngest and 10th child was born in 1908 (December 20th). However Bridget (the mother) did not die during childbirth but she did die on August 23, 1909 in the Cork district hospital of Typhoid Cardiac Syncope after being in hospital for 7 days. At the time of her death Denis and the 9 other children were living on Spring Lane in Cork.

In August 1909, Bridget (the baby), was only 8 months old, and was taken in by her grandmother Norah (who was widowed in 1902) in Rathcormac where unfortunately she died on October 8, 1909 from acute bronchitis — which her death certificate states she had for 6 weeks, around  the same time as her mother died.

Imagine Denis being widowed at the age of 34 with 10 children. Unfathomable in my mind.

So where does the “criminal” come into this story.

In 1915, Denis was living on Slattery’s Lane in Blackpool with five of his children. His two oldest boys, John and Denis, had joined the war effort: John joined the Army and Denis joined the Navy. Three of his ten children had died by this time: Bridget, the baby, died in 1908; Daniel died in 1912 and Christina died in 1914. So in the space of seven years, Denis was widowed and had three of his children die and his two oldest boys were fighting the Germans in Europe. Some life I’d say.

Court records from 1915 indicate that at the age of 38, he was charged with seven counts of “Breach of School Attendance” and found guilty on each of the charges and committed to 4 days of jail for each charge (28 days). He sentence expired on December 20 1915, just in time for Christmas.

Nora, his eldest daughter was listed as his next of kin –and probably was charged with taking care of the four young children who were still at home: Cornelius (13); James (12), Eileen (11) and Kathleen (9) — while Denis was imprisoned.

Those were extremely hard times in Ireland. I can’t even imagine the life that Denis, Bridget and their children had to endure: Death, despair and detention.